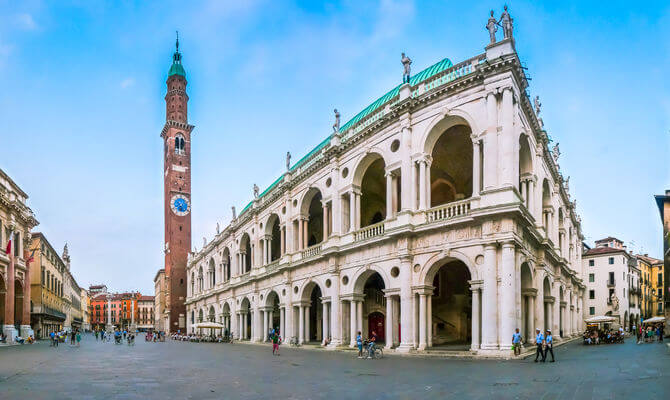 Located on the slopes of the Berici hills at the confluence of navigable rivers, Vicenza, known as the “city of Palladio” (the greatest architect of all times), has a history of over two thousand years and it is today one of the most fascinating and livable provincial towns in Italy, as well as an emblem of the Italian Renaissance.

Since 1994 it has been declared a UNESCO World Heritage Site. Here Andrea Palladio has left the mark of an unrepeatable age in which the generosity of some rich families has married an architectural language that has combined classicism and scientific rigor, elegance and comfort, giving to the admiration of contemporaries and posterity one of the most admirable examples of human genius.

When: every day on request.

The tour is confirmed with the participation of at least 4 people.
Extra:

Visit of Teatro Olimpico, a splendid revival of Roman theaters in a Renaissance style.

Aperitif on the Basilica’s terrace

Transfer from your hotel at Terme Euganee, also transport of your bikes with our bike trailer.

For info and reservations: